What is a fan to do with this latest information? 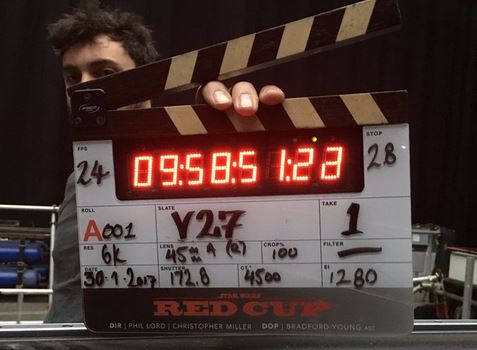 So with the first day of filming having been announced a few days ago, Chris Miller who's co-directing the Star Wars film based around the early life of Han Solo, has sent out an image of the clapperboard and the caption "Han First shot".
Is this pun in reference perhaps to the controversy surrounding edits made to the original movie for its 1997 re-release?
First thing to notice on the clapperboard is the working title for the movie, which remains officially nameless: Star Wars Red Cup.
No doubt Star Wars fans are desperately trying to piece together a meaning behind that title.
Some might think it is a reference to the Solo cup.
The movie will star actors Alden Ehrenreich as Han Solo, alongside Emilia Clarke and Woody Harrelson. Atlanta's own Donald Glover will also appear, playing the young version of the original trilogy's Lando Calrissian.
The movie will be released next year.
If you are planning on being there for the big movie release,  why not dress up as the man himself?
We've got you covered from top to toe.
Come and get your favorite Han Solo costume right HERE at JediRobeAmerica NOW